You are here: Home / Archives for On the front page 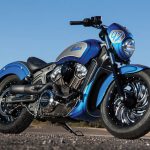 Since the launch of the first scout project in late 2015, indian motorcycle has seen the emergence of magnificent creations all over the world, based on the scout.  The whole thing has snowballed in a way indian motorcycle had neither expected nor imagined. An almost incontrollable worldwide phenomenon has begun, such has been the numbers of scout transformations to succeed each other over … END_OF_DOCUMENT_TOKEN_TO_BE_REPLACED