You are here: Home / On the road / VICTOR DREAM – PAN AMERICANA 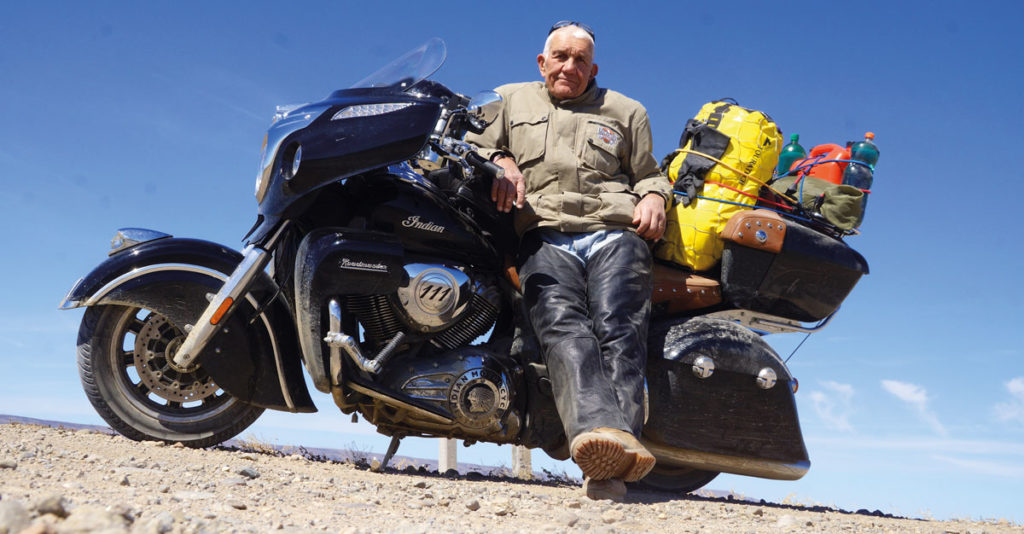 Ushuaïa to Anchorage with a Roadmaster

I love adventure, and I love to head off on a motorcycle and get lost on endless roads, so that’s why I decided to ride the Pan American highway. I wanted to do it alone so I’d get to experience the adventure I’d always dreamed of – my motorcycle, me, and never-ending roads.
Although it’s usual to do the route from North to South – and in a better season of the year – I decided to travel from South to North to take advantage of the fact that it was summer in the southern hemisphere, and also considering that the southern routes were going to be the hardest. Once in the States, the roads would be much easier.
My first challenge was to cross South America, and perhaps Central America would be tricky too. Originally the idea was to do it on a good off-road machine without a lot of electronics, but during the Daytona Bike Week I fell in love with the Indian Roadmaster, and I bought one. I put almost 6,000 miles on it and loved every single mile. I had full confidence in it, even though it was a touring bike.
Against all advice, I decided to embark on the Pan Am trip with my Indian Roadmaster. My adventure began when I took delivery of the bike in Punta Arenas, Chile. My good friend Peter Wurmer had taken care of shipping it over to me from Los Angeles.
I started my journey from Ushuaia, and all the fellow bikers I met along the way admired my Indian – this legendary brand had no representation in those countries at that time. A lot of them stayed in touch with me and followed my adventures through social media. And when I met Mario Arturo Montoro of the great Chilean biker club La Hermandad del Sur at a toll, my number of followers increased significantly and some even came up to greet me along the road. So much so, that in some gas stations all the employees would come out and take their photo with the “gringo with the Indian”. I was traveling alone, but biker friends can be found everywhere, and I felt very supported.
At a police checkpoint in Panama, very close to the border with Costa Rica, I was stopped because an immigration officer had forgotten to stamp my driver’s license. The police confiscated my bike and put me up in a hotel until the trial. I called Franco Santalucia, a biker friend I’d met the night before in Panama City. Half an hour later, Eros, the President of the 507 Extreme Club, informed me that someone would pick me up the next day and accompany me to court.

Biker friends can be found everywhere, and I felt very supported.

The next morning Meibis Zamudio showed up, a lovely Panamanian woman who spent the day with me in court helping to ensure my problem got resolved. In the late afternoon I was tried and acquitted, then escorted out of Panama. Isn’t the brotherhood of bikers around the world great? I’m so grateful for this.
Although I carried a small tent and sleeping bag, I always got a room where I could rest and keep the bike covered – oftentimes in original ways. I received more and more messages of support, which helped keep me going. Despite the difficulties with the dirt tracks and very low octane gasoline, I was delighted with my bike. The passage through Central America was a bit more complicated and my GPS wasn’t working, but I just had to keep heading north. Going through three countries in the same day is a very curious experience. In some areas, it was really scary to see the caliber of weapons carried by some of the guards...
When I’d racked up almost 10,000 miles on my bike – many of them off-road – I went to a motorcycle dealer in San Luis Potosi, Mexico. I met the owner, Ricardo José, and asked for an oil change, but they also changed the filter, cleaned the air filter, and washed the bike. When I went to pay, he simply told me: “Enjoy it, it was an honor to do this for you”. He wouldn’t let me pay for anything. Once again, I would like to thank them for their kindness.

In Los Angeles I changed the tires. I could tell they’d suffered from the dirt roads and potholes in the pavement. I caught up with my friend Peter Wurmer, a great former biker and founder of EagleRider. He congratulated me on making it that far and asked if I would wait for better weather conditions in May before continuing my trip to Alaska. No way! My intention was to go right ahead and carry on riding north, despite the season of bad weather that awaited me in that direction. I started to see snow along the side of the road when I got onto the Trans-Canada Highway 1, approaching Kamloops, in Canada.
From there the road began to get more complicated, and I had to be very careful as I navigated the increasingly frequent ice and snow. Temperatures dropped a lot, and I had to change my sneakers for a pair of boots I’d bought along the way.
I could already see signs pointing to Alaska, which subconsciously cheered me up as I knew I was getting closer and closer to the far north. One of the signs said that from October 1 to April 30, cars and campers must have winter tires and trucks must have chains. But it didn’t specify anything for motorbikes! So I continued on my way.
The road was now covered in patches of white in many areas, but I could still ride well, and eventually I got to Bell Lodge where The Last Frontier Heliskiing is located, one of the best-known and biggest Heliskiing centers.
While I was refueling, a lumberjack arrived in his old truck and we got talking. He advised me not to continue northwards because he’d just come from there, it was snowing, and he said the bike wouldn’t make it through. Yet again, I told myself that if I’d made it this far, it wasn’t to stop here.
In winter, the gas stations in the North are unattended. While I was in one of them, there was too much snow and my bike fell over. There was no way I could stand it up again on my own. After a while I noticed some smoke coming out of a chimney between the trees, so I walked closer and found a house there. I knocked on the door and the kind inhabitant immediately returned with me to my bike to help me lift it upright again.

From there on, the road was snowy, with hardly a bare stretch to be seen. When I reached the Alaskan border, one of the patrollers was a biker and told me, very kindly, that he’d been doing the job for 14 years and had never seen a motorcycle there at this time of year. He tried to talk me out of continuing on to Anchorage by telling me that the National Park was closed because snowstorms had been forecast. He was obviously very worried about me riding under such dangerous conditions. To reassure him, I pretended to go to the nearest hotel to stay the night.
That day I covered 1,093 km in 15 and a half hours. I knew this would be my chance, so I took it – and I made it. At long last I arrived in Tok, Alaska, only 530 km from Anchorage. I knew that I’d reached the northernmost point of my trip, and that after Anchorage there was only one pass left.
The next morning, road conditions began to improve, and I was traveling faster. When I stopped at a gas station, I met a local couple with a pickup carrying firewood. They were very interested in my whole ride and told me yet again that I wouldn’t make it, because there was a snowy mountain pass further on.
The landscape was immense, and the sky became increasingly dark and threatening as I climbed. I think my Roadmaster was as eager as I was to overcome this final test… And then, finally, we reached the top! But it still wasn’t over – I hadn’t imagined that the descent on the other side would be so slippery and tricky. The turns in the road eventually lessened so it became much easier. The rain kept coming down on me all the way to Anchorage, and when I finally rode into the city I was screaming with joy.
Against all the odds, I had made it. Physically alone, yes, but always accompanied by all the friends and bikers that had followed me during my trip and who were calling and writing me all the way through!
I had ridden solo from South to North America across 14 countries on an Indian Roadmaster. Many people ask me how I was able to ride so many miles over snow. I was very, very lucky because I knew that if I fell, I wouldn’t be able to stand the bike back up on my own.
The lowest temperature registered on the bike’s thermometer was -23°C, and the proof of that was there were icicles on the front fender. I hadn’t brought the right clothes to prepare for such temperatures, but the heated seat and handlebar grips were a great help.
I wrote a book about this journey based on my daily notes and the compilation of data like miles travelled, hours on the bike, averages, problems I encountered, and multiple anecdotes from my extraordinary adventure.

I’m still happy with my 2016 Indian Roadmaster, which I continue to ride, traveling thousands of miles across the United States.