You are here: Home / On the road / TWO WOMEN TAKE A ROAD TRIP ACROSS EUROPE 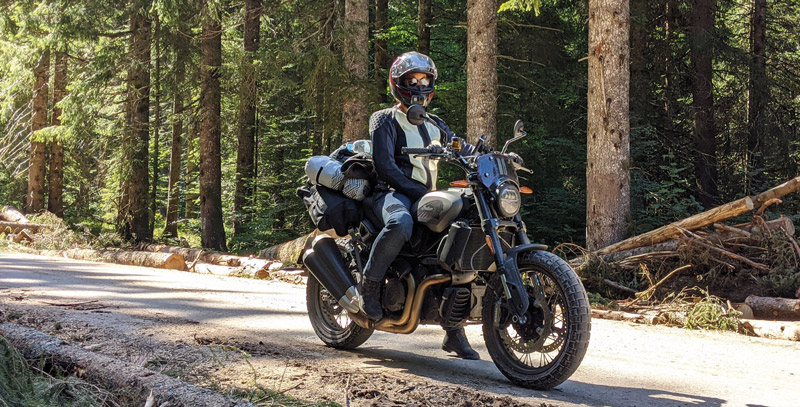 Sinje Gottwald and Kinga Tanajewska first met on the Silk Road in Tajikistan. Three years later, they embarked on their first adventure together, Discover Europe – an unforgettable trip that saw Sinje and Kinga explore Europe’s winding roads and breathtaking landscapes on an FTR Rally and an FTR 1200.

From Leipzig to Zagreb.
Kinga and Sinje began their journey at our Indian Motorcycle dealership in Leipzig. They spent the first three days riding through the Czech Republic and Austria, bound for Zagreb. There they met up with a local biker group for a ride into the mountains near Zagreb, which turned out to be ideal terrain for the FTRs. Sinje and Kinga particularly enjoyed the endless series of bends on the winding roads.

From Zagreb to Trogir.
Their next destination was the Plitvice Lakes, Croatia’s largest and oldest national park. It’s an area that will be familiar to all hardcore Winnetou fans, since the legendary films were shot there. The route also included unpaved roads, which both FTRs coped with admirably.

The next day, Sinje and Kinga rode on to Trogir – where sadly they had to part ways again. Coronavirus restrictions prevented Sinje from travelling any further east, so Kinga pressed on alone to Montenegro, while Sinje continued her tour through Europe via Italy.

Bella Italia!
Sinje’s trip to Italy began in Bari, a port city on the Adriatic Sea. From there, she followed the coast before heading further inland to Matera, where she spent the night in a spectacular cave apartment in the Sassi district.
Unfortunately, she had to endure unrelenting rain until Salerno – but the following day’s ride along the Amalfi Coast, with its picturesque scenery and winding roads, offered ample compensation.
After a short detour to Naples and Capri, by the next day she was already en route to Angiona to see its ancient church bells. The high temperatures there made her appreciate her Indian jacket, which helped to keep her relatively cool.
The absolute highlight for Sinje turned out to be Villamagna, a small town fifteen minutes east of Florence. She felt at home at the Affittacamere Podere Di Belforte guesthouse from the moment she arrived.

The wild Balkans
While Sinje enjoyed Italy, Kinga explored the mountains of the Balkans: Durmitor Park in Montenegro, the Albanian Alps, and the lonely mountains of Macedonia. The FTR proved a loyal companion, taking her to the highest mountain peaks and handling any road surface – asphalt or gravel. Back in civilization, she met up with friends old and new. Kinga, who normally rides a fully loaded Adventure Bike, especially appreciated how easy the FTR was to ride. “Despite being a 1200 cc bike, it remains really agile and easy to handle. It’s so much fun cruising through the city, even with luggage.” On her way home, Kinga stopped off at the spectacular Lisine Waterfalls in Serbia before finally bringing her FTR back to Germany, having completed a journey of some 6,000 km.

Sinje’s final leg.
Sinje returned home from Italy via the Maloja Pass in Switzerland, where she ended her tour exhausted but euphoric.
The trip was the best thing that had happened to her since her return from Africa. After three years of traveling the globe, she was afraid she would go crazy in the relative normality of Germany – but this experience in her European ‘back yard’ made her realise that relatively minor adventures can still offer her the freedom she craves.
Her affection for the Rally is obvious in her photos and videos. Whether the ride is through the mountains, on narrow roads, or spanning longer distances, the FTR is pure fun, as well as ensuring excellent comfort and safety, even in the rain, both on-road and off-road. As Sinje sums it up, “I don’t know of any other bike that’s as versatile as the Rally. She mastered every route I asked her to take. Not just because she had to, but because she could.”