You are here: Home / On the road / TAKING MY NEW CHIEFTAIN FOR ITS MAIDEN RIDE 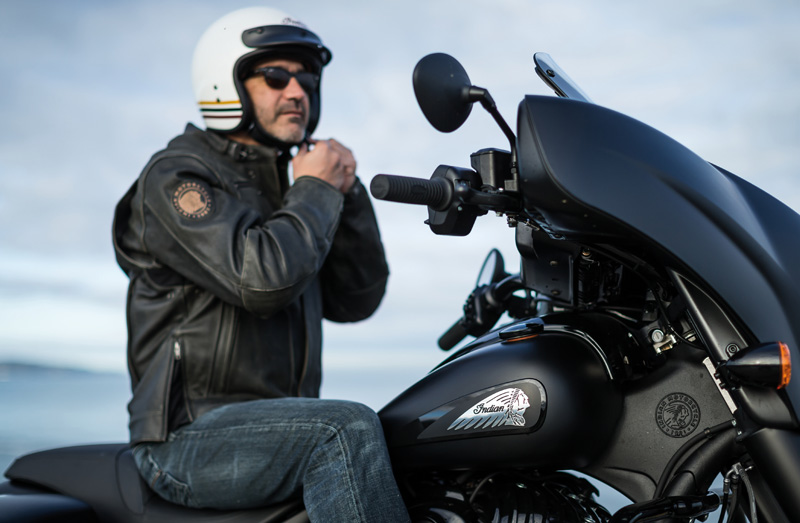 I’d handed my old scout over to its rapturous new owner at the beginning of the autumn, and after that I didn’t know what to do with myself. When i’d seen the latest chieftain online, I knew straight away I had to have it, but my Indian dealer had warned me I’d have to wait ‘til early january before I got my new machine.

I’d test ridden the previous Chieftain the summer before and I was sold on the en-gine, which took things to a whole other level than my Scout 1200 – and that was already pretty beefy. But I was looking for bolder, feistier styling. I wanted a bike that reflects my personality, for local rides, but also a bike that can handle distances comfortably and safely, and could carry enough of my stuff for a couple of days away. I was sick of fastening my weekend bag on with bungee cords.
So in November when I saw the design of the new Chieftain, I couldn’t resist! Its sharper contours, the low-slung rear that counterbalances the big 19-inch front wheel, and the Gunfighter seat give it the look of a modern bagger – but without losing the traditional hallmarks of an Indian. 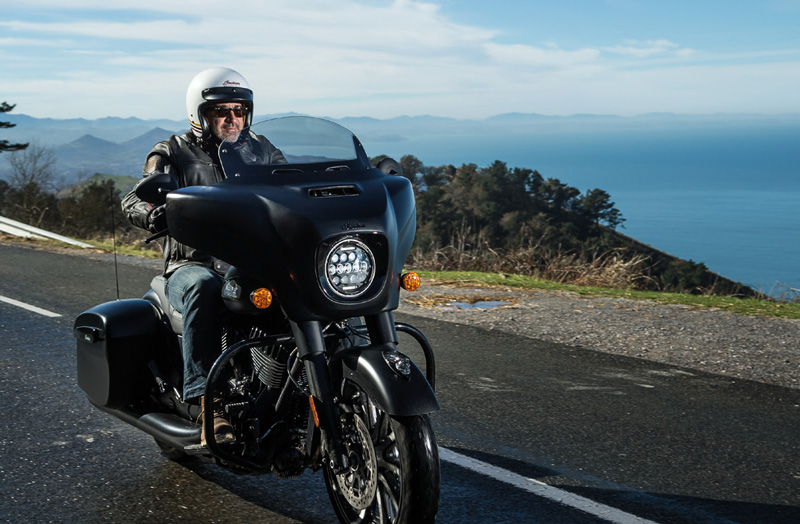 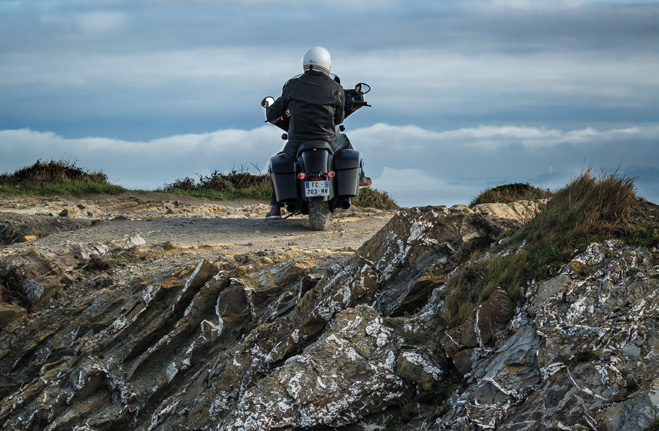 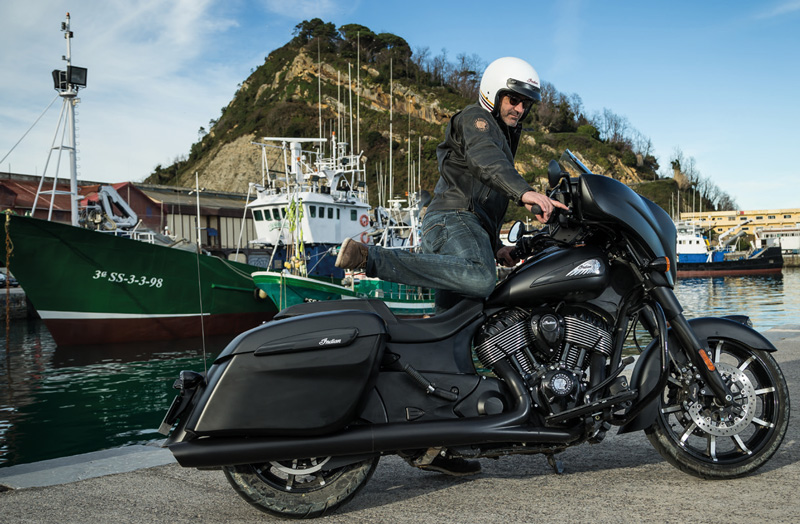 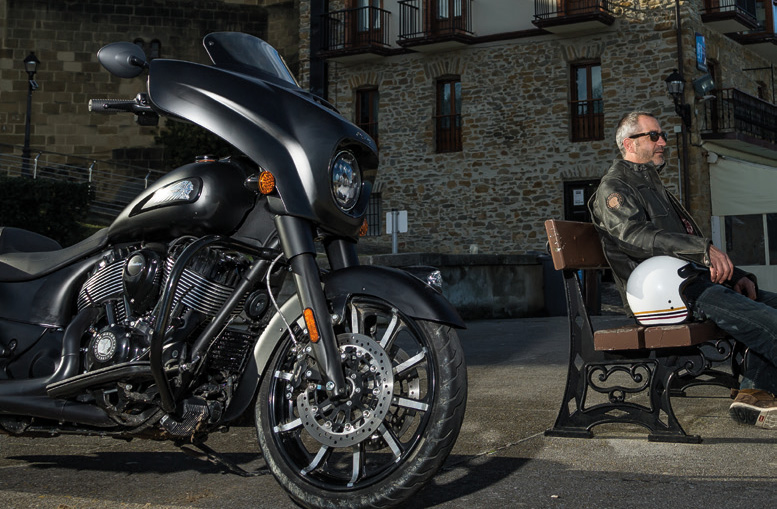 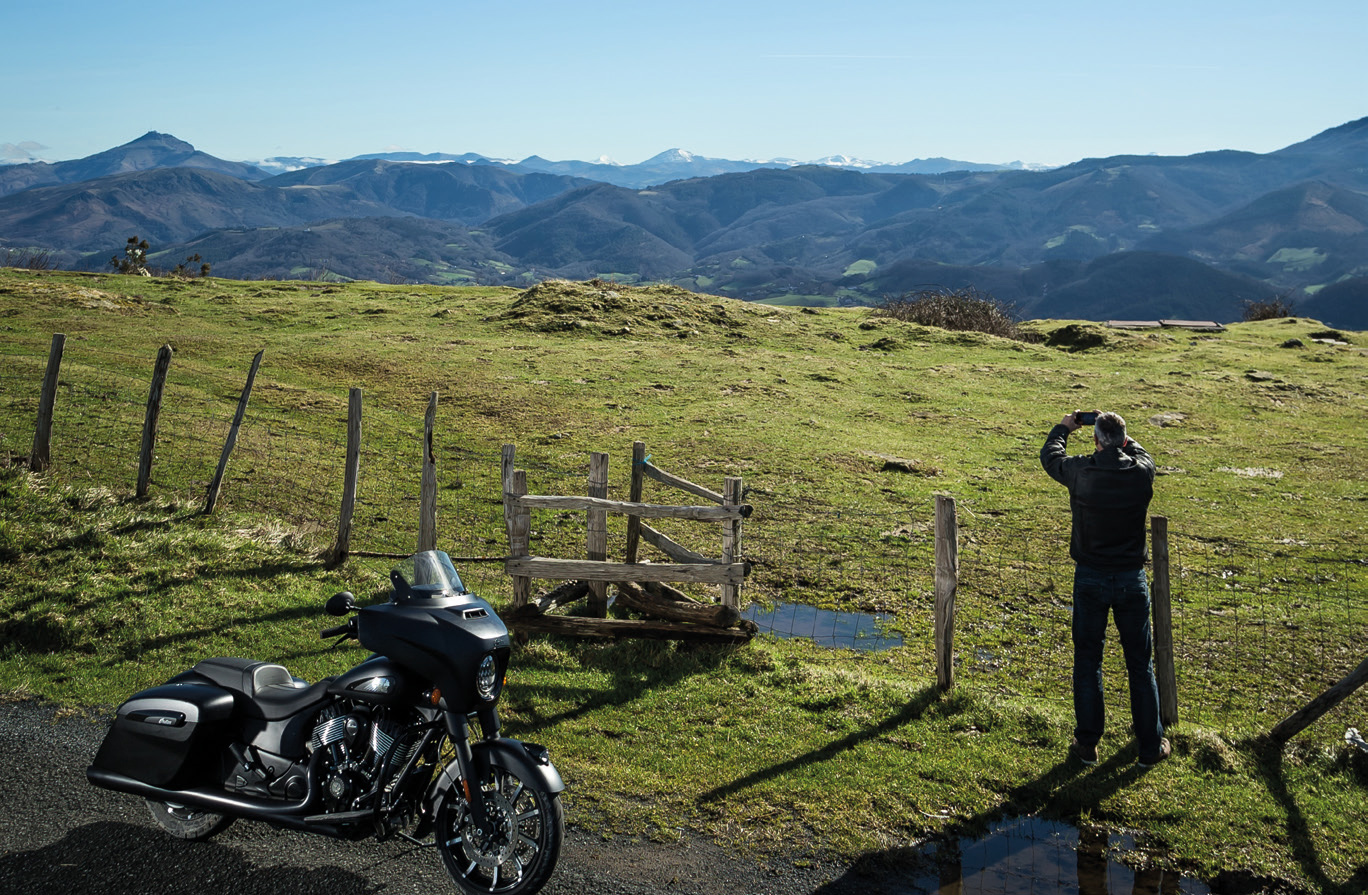 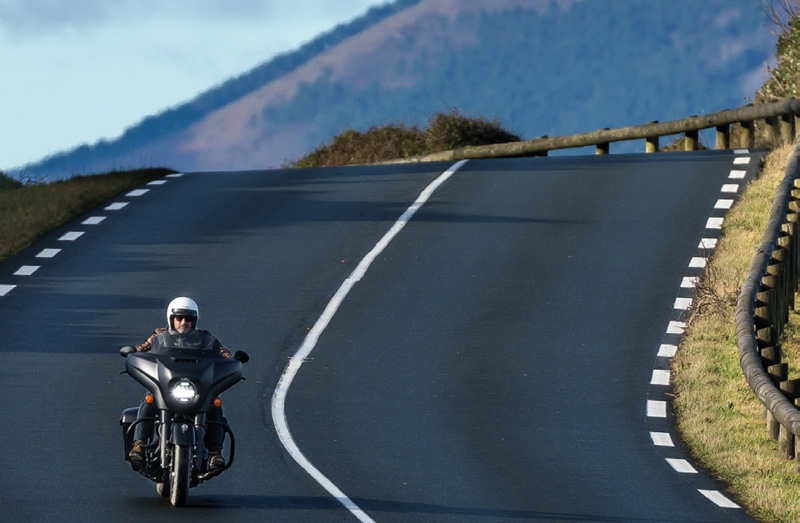 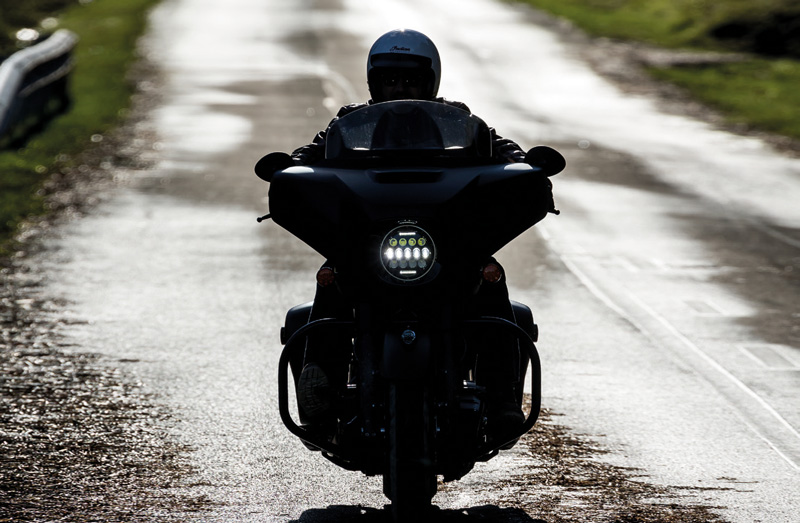 I’d only been back at work a few days after the Christmas break when the dealership rang to tell me that my Chief-tain had come in two days ago. I was out of the office like a flash, pretending I had an appointment, and headed straight over there!
There she sat, in all her majesty, waiting for me in the middle of the store – a beautiful matte black, with a “SOLD” label stuck to the handlebars and my name written on it. I was like a kid getting his toys under the Christmas tree. I examined it from every angle and ran my fingers all over it, from the handlebars right to the rear mudguard.

In the end my dealer, Iker – who’d been watching me dance around it – said with a smile, “You’re allowed to sit on it, you know, it’s yours!”
He was right, of course, so I swung my leg over and straddled my new bike. I was surprised by the ride height, slightly lower than I’d imagined, but the saddle gives good support. The handlebars were perfectly positioned, and my feet sat firmly forward on the footboards. I pushed the ignition and the dash lit up with a load of digital indicators all around the GPS navigation system. I was amazed. Iker explained all the features to me, including the three ride modes – Tour, Standard and Sport – as well as all the com-bos and functions of Ride Command, that I’d be able to set the way I wanted as I got the hang of them.
We took the bike outside to start it up, and I was thrilled with the sound of the Stage 1 I’d ordered. Rumbling gently at low revs, full and deep as I opened the throttle, it gave the engine a rich, throaty exhaust note that was a joy to hear!
It was Friday night, and getting dark, but even though it was winter in the Basque Country, the weather forecast for the following day was good. So luckily I knew I’d be able to take my new bike out for a ride very soon.
The sun was shining when I set off from San Sebastian with a full tank, my helmet on, and a few layers of clothes under my jacket. I was as happy as I’d been at 14, riding my first 50cc. What a sense of freedom! After ri-ding around the city and along the bay, I took it for a run down the coast. Already in the first few miles, I could feel the huge amounts of torque, the smoothness and wide manageable powerband of the en-gine, which picks up as soon as you open up the throttle, no matter what gear you’re in. I was really impressed. The real magic is that sound that’s so distinctive of big VTwins – the changing notes of the engine as you ride along are almost like a symphony. Steering it around the curves and bends in the road was incredibly easy. I think the 19-inch wheel makes for better handling, because it felt really ba-lanced and fell into the right angle of lean very naturally.
Feeling the tingle in the air, I suddenly re-membered the winter chill. With the tip of my index finger I activated the rise of the power windscreen. What luxury! Now I was completely sheltered. I arrived at Ge-taria where winter had settled in, making everything seem quite still – right down to the deserted fishing boats, hung up on the docks.
I made the most of this break to go through all the Ride Command functions by tapping on the screen and buttons. When I connected my phone to the bike’s Bluetooth®, my playlist came up on the screen as if by magic. All I had to do was hit “play” and crank up the volume – next thing I knew, the sound of Mark Knopfler’s guitar was blasting out of the 100-Watt speakers and wa-king up the neighbourhood!

I shifted into first, the Dire Straits playing in my ears, and turned back towards Zarautz for a warming coffee. There I was, riding the bike of my dreams, and I felt like the hap-piest man alive.

Essentials of the new Chieftain :