You are here: Home / Focus / EVEN MORE EVERYTHING 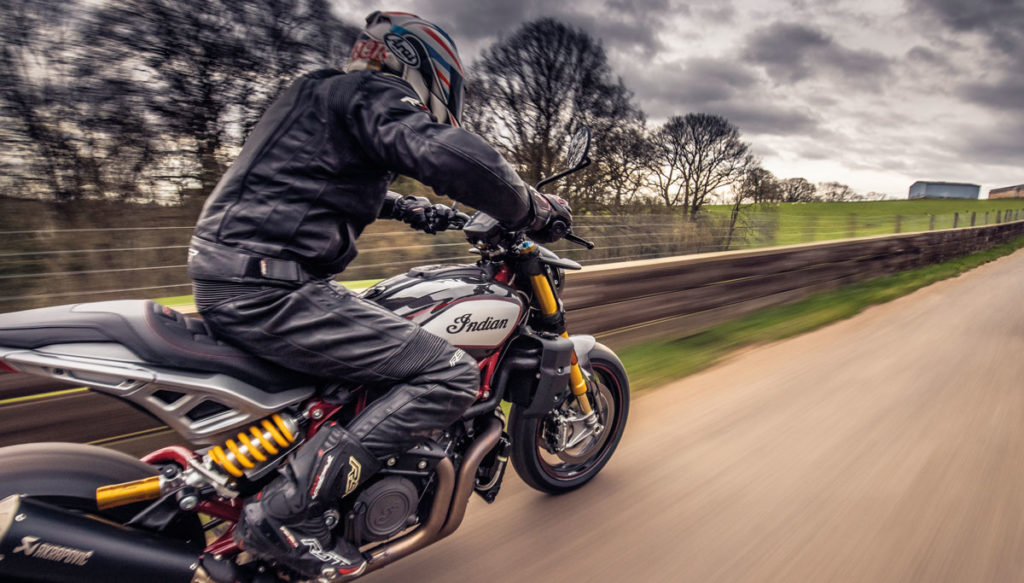 When Indian Motorcycle launched the FTR 750 in 2016, it was a return to the company’s flat track roots—to the post-WWII era when the U.S. was consumed by the sport and the legendary Wrecking Crew dominated the podium. In 2019, the FTR 1200 debuted. It was a machine born on the dirt but built for the street.
This year, the legacy continues with the new FTR, FTR S, and FTR R Carbon, taking street performance, approachability, and control to a whole new level.

Calling the FTR the base model is like calling base camp at Mount Everest the lowlands. This bike is as much about capability as it is about authenticity. Every twist of the throttle is a thrill.

WE LISTENED. THEN WE IMPROVED.

Every Indian Motorcycle has a product manager. Someone who takes control of each step, from “Do you think we could…” to the first dealership delivery. For the 2022 FTR, that person was Ben Lindaman.

Lindaman started with a challenge: the success of the original FTR. “The style and performance of the bike resonated well,” he says. But thanks to customer feedback, he knew it could be more. “We monitor all social networks, and when someone buys a bike from us, we reach out and ask questions. We get so many comments about loving the bike, but we want to hear the bad stuff too.” What he discovered was that owners loved the track pedigree of the FTR, but they wanted the bike to be even more street ready.

The first thing Lindaman and his team of engineers and designers addressed was the tires. The original FTR had 19-inch wheels and knobby tires that are great for mixed use, “but not the best option if you want to carve canyons,” Lindaman says. They swapped in 17-inch wheels and Metzeler® Sportec® tires instead. At 150mm, the suspension travel was similarly optimized for off-road riding, so “we went to 120mm.” Then there was the seat, which many riders said was higher than they expected.
Changing the height of a motorcycle seat isn’t as simple as grabbing a wrench and lowering it. To reduce seat height, the rake had to be steeped and the trail lessened. There was computer modeling, followed by physical prototypes, tweaking at every step before testing, and tweaking again until they got it right: a seat that is 1.4 inches lower than its predecessor, providing improved control and confidence.

With the design complete, it was time for the components. “Going into this new world of neo-retro-type bikes, we wanted to partner with people who were known and respected in the industry,” Lindaman says. The team added Akrapovič exhaust to maximize power and substantially reduce the overall bike weight. They used Brembo® brakes to provide optimized braking ability, and fully adjustable Öhlins® forks and piggyback shocks for a smooth (and customizable) ride.
The result, Lindaman says, “is much more agile, much more nimble, with much quicker response. Going through corners, you just feel so precise. It puts you in the position where you are in optimum control.”
It’s a whole new FTR.