You are here: Home / Focus / A RIDE FOR CHIEFS! 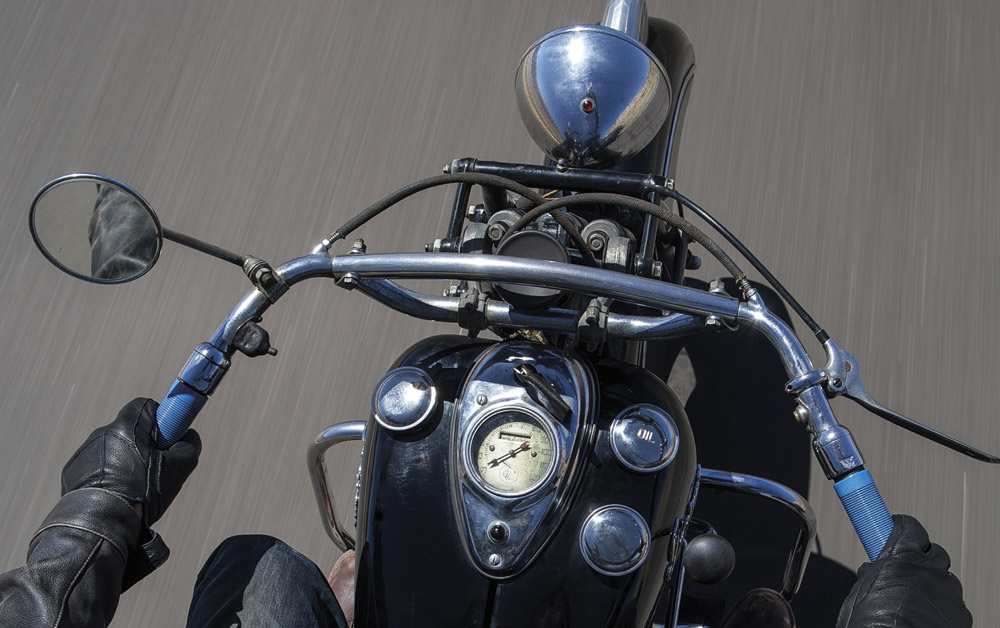 Between 1922 and 1953, the first generation of Chief models were to become one of the greatest chapters in Indian’s history. Here’s a look back at three decades’ worth of the legendary Big Twins, brought to life once more by the present-day Indian Motorcycle Company in 2014

Many of the models produced during the first 52 years of Indian’s existence achieved iconic status, but two machines in particular really deserved that description, as they have made a lasting impact on the collective imagination: the Scout and the Chief. It’s much the same story today. The Scout was introduced to modernise the range in 1920, although the Powerplus, launched in 1916 and produced in vast numbers during the First World War, continued to be made for some time. Despite its relatively modest 600cc capacity, the Scout proved to be an excellent motorcycle, so much so that a 1000cc Chief version was also made available from 1922 onwards. The new Chief was officially unveiled on 5 September 1921, and was an immediate success. Once again, Irish engineer Charles B. Franklin achieved the miraculous with his sidevalve engine and its timing cover housing twin camshafts. The primary drive, featuring a helical transmission and oil bath, linked the 42-degree twin-cylinder engine to the three-speed gearbox, the latter being firmly bolted to the engine. The powertrain was itself screwed into the double lower cradle of the generously-proportioned rigid frame. The leaf spring suspended chassis used on the Powerplus was undoubtedly ahead of its time, but was not very stylish and had a tendency to cause chain breakages. In returning to a rigid rear suspension, Indian adopted a more harmonious design, relying instead on the saddle springs and leaf sprung trailing arm forks to provide ride comfort. Up until 1926, the cylinders on the Chief were ‘blind’: the cylinder heads could not be removed. Instead, access to the valves was via shafts with removable threaded caps, two of which also accommodated the threaded end of the spark plugs. For a time, the Powerplus lived on alongside the 1922 Chief – albeit under the new name of ‘Standard’, so as not to give the misleading impression that it was more powerful than the Springfield manufacturer’s newer offering. After an 1189cc version, launched in 1921, the Standard was finally discontinued in 1924, while the Chief range was expanded to include a 1206cc version alongside the original 1000cc model. The Scout remained as popular as ever, thanks to intensive promotion by the brand. The goal was for the 600cc bike to attract younger clients who would later upgrade to the Big Twins – a commercial strategy that was further reinforced by the arrival of the single-cylinder 350cc Prince in 1925.

Nevertheless, it was the larger Chiefs, especially the Big Chief, that forged the brand’s reputation: these bikes were real workhorses, able to carry any load – and indeed, they generally had a sidecar attached. In addition, the factory, known as the Wigwam, had a special department dedicated to making the manufacturer’s engines even more powerful at the request of customers. These ‘B-Motors’, as they were known, were assembled by dedicated technicians, and gave rise to highly limited-edition superbikes based on both the Chief and the Scout. On these Daytonas, Savannahs, and Bonnevilles, everything that could be tweaked was, with larger carburettors, aluminium pistons, high-performance camshafts, and greater play in moving parts to avoid them seizing up. However, the Chief’s engineers then rested on their laurels somewhat for four years, until the next substantial mechanical changes were made to production models in 1926. These related mostly to the connecting rod assembly, with the outward appearance of the bikes remaining unchanged. After these internal improvements, the design office once again turned its attention away from the Indian Big Twin to concentrate on the Scout and another new model, the superb four-cylinder machine recently acquired in the buyout of the Ace brand. The V-Twin was further refined somewhat in 1928, the year which saw every US manufacturer simultaneously adopt front brakes for the first time. In March 1930, under the chairmanship of E. Paul duPont, Indian was set to scale even greater heights, all the more so in that the new boss was not only chief executive, but also an ardent motorcycle enthusiast himself. It was at this time that the appearance of the Chief began to change, with a new, gracefully curved fuel tank in place of the former tank, housed within the tube frame, that had been used for over twenty years. The next year’s model used up the remaining stock of thick-walled, cast aluminium tanks, after which these were replaced by a more traditional pressed steel version.

Chiefs were becoming sturdier thanks to technical refinements – and also more attractive to look at. The ‘Chief Indian head’ horn cover is one of the most beautiful components ever produced by the manufacturer, and the two-tone paintwork features outstanding graphics. In the absence of any major technical advances, 1940 saw the appearance of large, curvaceous fenders, imitating the style of the automobiles of the era. Some bikers deemed this facelift a waste of time, but most embraced it enthusiastically. The superb bodywork was accompanied by a suspended sliding frame, as well as cylinder heads sporting elegant, profiled fins. Sadly, war was raging in Europe; the French army’s order for five thousand military Chief Continental Army Vehicles (known as CAVs) left US dealers bereft of bikes. To add insult to injury, half of the precious cargo was lost at sea after a torpedo attack in the Atlantic, and many of those CAVs that did reach France were requisitioned by the enemy. 1944 and 1945 were financially disastrous years for the Springfield-based manufacturer, but in 1946 Indian bounced back with its new generation of civilian Chief 1200s. With them came the return of skirted fenders and of the girder fork borrowed from the 841 model, a small production run featuring a transverse V-twin engine and shaft drive. The Chiefs produced between 1946 and 1948 are undoubtedly the brand’s most emblematic models, but the sad fact is that their superb styling concealed a lack of technical development compared to the competition. Flathead engines and three-speed gearboxes may have been indestructible, but they were already technologically obsolete. CEO Ralph B. Rogers preferred to focus on the new Indian Arrow and Scout models, designed to rival British bikes, and the Chiefs were dropped from the 1949 catalogue. They made a brief comeback in 1950, fitted with a hydraulic telescopic front fork and a more powerful 1300cc engine. But output was plummeting, and these last-ditch efforts failed to save Indian from bankruptcy in 1953. It would be another 60 years before the elegant lines of the Chief were to return; now, with the Thunder Stroke 111 engine, its success is here to stay.