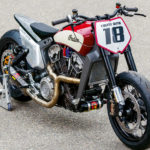 This amazing Scout was made by the Swiss Young Guns duo, Nik Heer and Fabian Witzig who invested 700 hours of work in their workshop, in the small village of Rapperswil, just south of Zurich, to turn this machine into a real sprint racer.
END_OF_DOCUMENT_TOKEN_TO_BE_REPLACED

With over 80,000 km racked up on his Chieftain, in the last two years Alain has ridden all across France and Europe! A seasoned biker, from Languedoc region in France, he has been riding since the age of 16. He has had many bikes in the past, such as a R60, Gold Wing and even a Hayabusa. He ramped up 1,600,000 km on these, before ﬁnding the make he dreamed and drew pictures of in his school copybooks – Indian! Young and retired, every-thing is a pretext for riding his bike daily.
Among the people he chanced upon at a Guichard Motos meeting in Montpellier, now the OC Riders Group, Alain met Gérard, another Indian fan who has also been clocking up kilometres on several continents on his Chief Classic. Originally from the Vosges region, he started out on a 125 BPS enduro bike and ﬁnally got his licence in the 1980, when he started to ride a Softail Heritage. Two years ago, ﬁnally free of his professional obligations and seeing the production of the new Indian, he fell for a white Classic and set off to explore South America. Other voyages followed in Europe, Morocco and across France, resulting in over 50,000 km on the clock.
The last time the two die-hard bikers Alain and Gérard met, they decided to set off for the North Cape in June. Meanwhile, Gérard also bought himself a Chief-tain. Their road trip to the outermost tip of Norway is well planned, step by step, with the departure set for 1st June. They will travel 10,000 km in twenty ﬁve days, riding through Ger-many, Denmark, Sweden and then Norway on their way there. They will return via Finland, Estonia, Latvia, Lithuania, Poland and Germany! The aim is to arrive in Fontainebleau, in France, on 25 June, for the stage of the Indian Road Show! 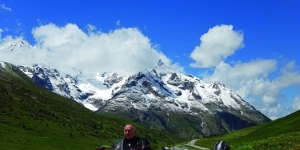 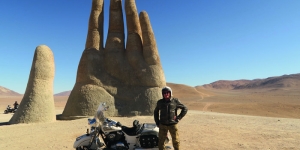 Andres Soto is a genuine member of the big biker family and we at Indian Motorcycle are honoured that he is buying one of the ﬁrst Chiefs in Europe.
Andres lives in Murcia in Spain and only ever travels by bike. For years, he rode Harley Davidsons. When the
return of the Indian, the make of his dreams, was announced in 2013, he immediately went to see his local
dealer where he paid a deposit without even seeing the model. He just wanted the ﬁrst one to come in. His
Chief Classic First is already a collector’s bike, with the number #1035 on its side, identifying it as one of
the ﬁrst 1,901 machines to leave the production line in Spirit Lake.
For his ﬁrst ride on his Chief, Andres rode to the Elephants Rally in Germany, a traditional annual winter  meeting created in 1956 that takes place early in the year. The hallmark of this genuine pilgrimage is the invariably bitter cold. It is frequented by hardcore bikers, such as Andres, who ride on frozen snow-covered ground to get there.
An avid biker, he never misses a meeting, gathering or concert, which punc-tuate his life. In doing so he ﬂies our colours making him a true Indian ambassador. As proof, his Chief already has over 80,000 km on the clock. 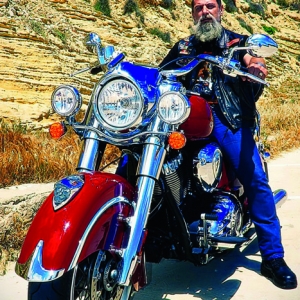 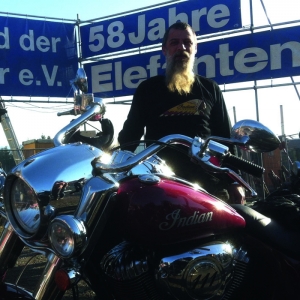 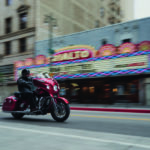 TIME TO HIT THE ROAD

After announcing the launch of the 2017 Roadmaster and Chieftain models with the new ingenious Ride Command navigation system, the leather-wrapped Roadmaster Classic was next to be shown. Continuing to foster a culture of excellence, Indian Motorcycle recently announced the addition of the magnificent
Chieftain Elite and Chieftain Limited. Here is a review of the troops! END_OF_DOCUMENT_TOKEN_TO_BE_REPLACED