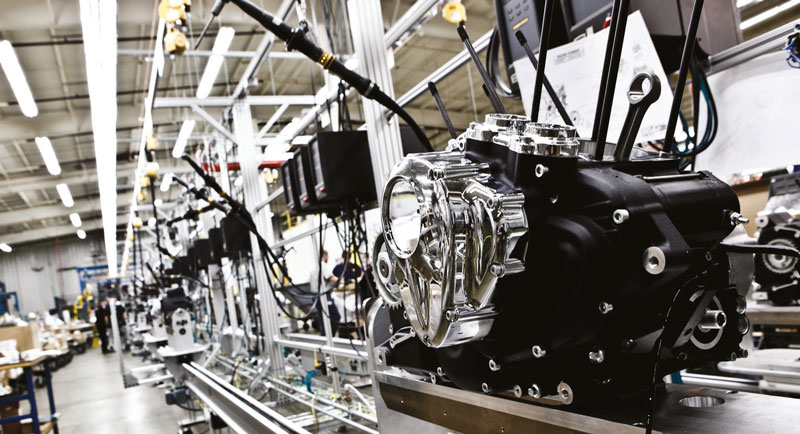 Indian motorcycle’s comeback in 2013 was materialized by the launch of the chief range, which is powered by the stunning Thunder Stroke 111. Recently, the 100.000th model of this engine left the assembly line. Flashback on this unprecedented adventure.

“We are excited to be part of the revitalisation of a quintessentially American brand. Indian built America’s first motorcycle. With our technology and vision, we are confident we will deliver the classic Indian motorcycle, enhanced by the quality and performance for which Polaris and Victory are known”, said Scott Wine, CEO of Polaris Industries Inc. on April 19th 2011, the day Indian Motorcycle’s buyback was announced. These few words were giving a clue to the product roadmap Steve Menneto – CEO of Indian Motorcycle – was going to give Gary Gray, who was nominated Project Manager of Indian Motorcycle’s rebirth after twenty years of service at the Polaris motorcycle department.

“That was an honour. And terrifying at the same time” Gary recalls. With his entire crew, he immersed himself into the brand’s history in what he calls “the Indian heritage tour”. During this venture, the team visited a few collectors, including one from Iowa where they had a chance to test ride all models from 1920 to 1940. Then they went to the National Motorcycle Museum in Anamosa (Iowa), to educate themselves about the brand’s history.

“It was very important to restart from where the brand had stopped in its authenticity and thus progress in our work. Had we not established this connection with the past, we would have lost.” Gary Gray avidly read piles of books to learn all details about Indian’s distinctive features and to understand the different mechanical architectures of its engines. In the meantime, his crew was collecting all possible information about historical Indian owners. After having compiled a great amount of work, a list was set up to define what the first Chief model should look like.
“We started with the motor and when I asked the engineers we need to design an engine with a downward-firing exhaust and some visible pushrod covers on the sides, they just shook their heads. I told them that those are two of the most important elements that connect this engine to our past. For any other product, they would have said “no way” but they understood it for Indian. From that standpoint, everything was much easier.”

Promise kept: in Daytona on March 9th 2013 and after 27 months of an enormous amount of work by several teams joining their efforts and highly qualified competences, Indian Motorcycle was unveiling the great new twin cylinder Thunder Stroke 111 which would motorise the new Chief range, unveiled in Sturgis on the 4th of August 2013. At this date, Steve Menneto proudly announced that close to 2 million kilometers had been successfully run by this splendid motor on a test bench. Five years later in May 2018, the Indian engine assembly plant in Osceola, Wisconsin, celebrated the production of the 100.000th Thunder Stroke 111 motor!

Today, the Thunder Stroke 111 engine is the heart of the heavyweight range for tens of thousands of motorcycles around the world. This means millions and millions of miles for this fine engineering with its exceptional reliability. The demonstration of ruggedness and performance has been largely proved internationally.